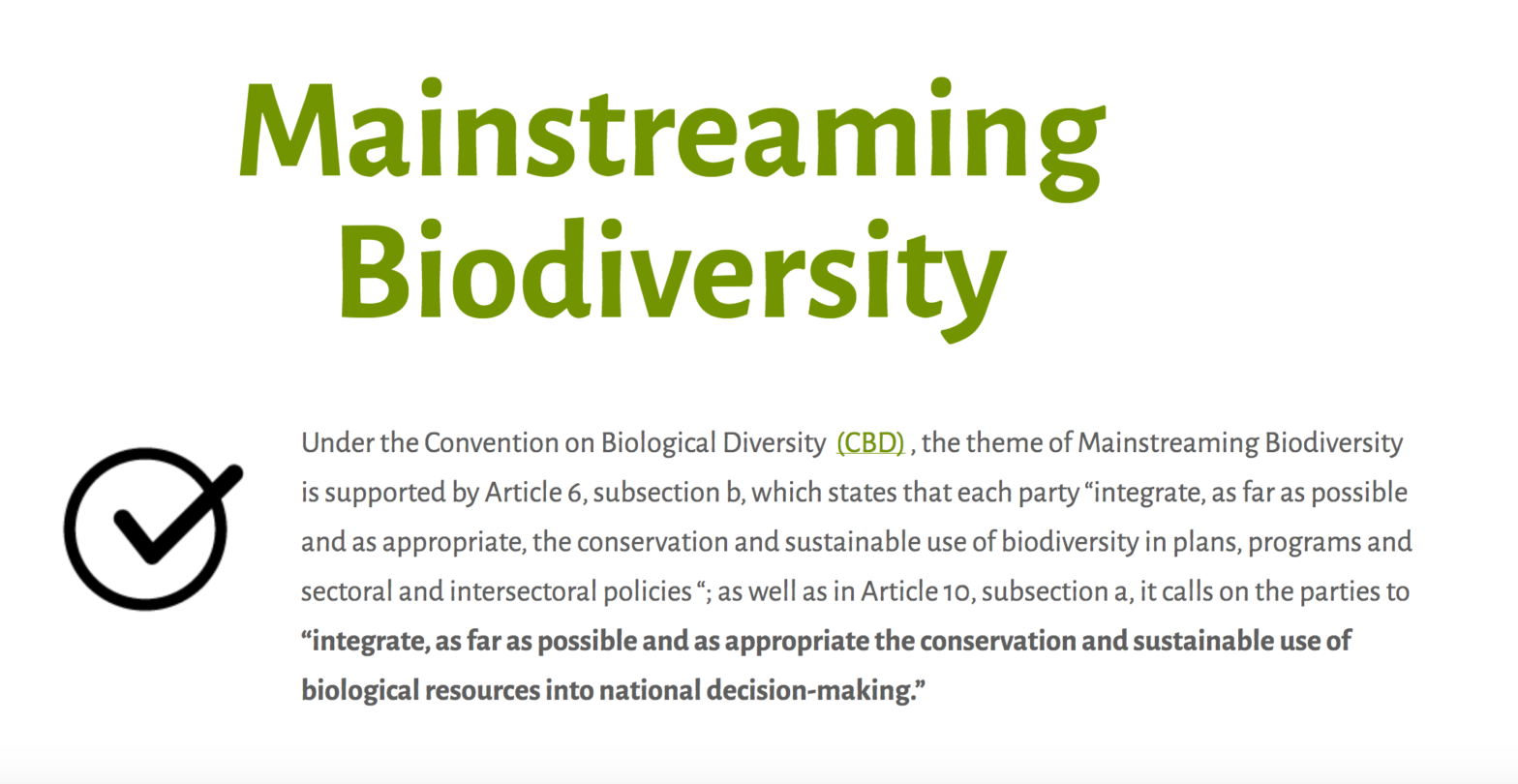 This article  was written by Nele Marien, co-coordinator of the Forest and Biodiversity Program of Friends of the Earth International, on December 3rd 2016. On that day, representatives of the 196 countries who participated in the High Level Segment of the 13th Convention of the Parties of the Convention on Biological Diversity adopted the “Cancun Declaration on mainstreaming the conservation and sustainable use of biodiversity for well-being”. 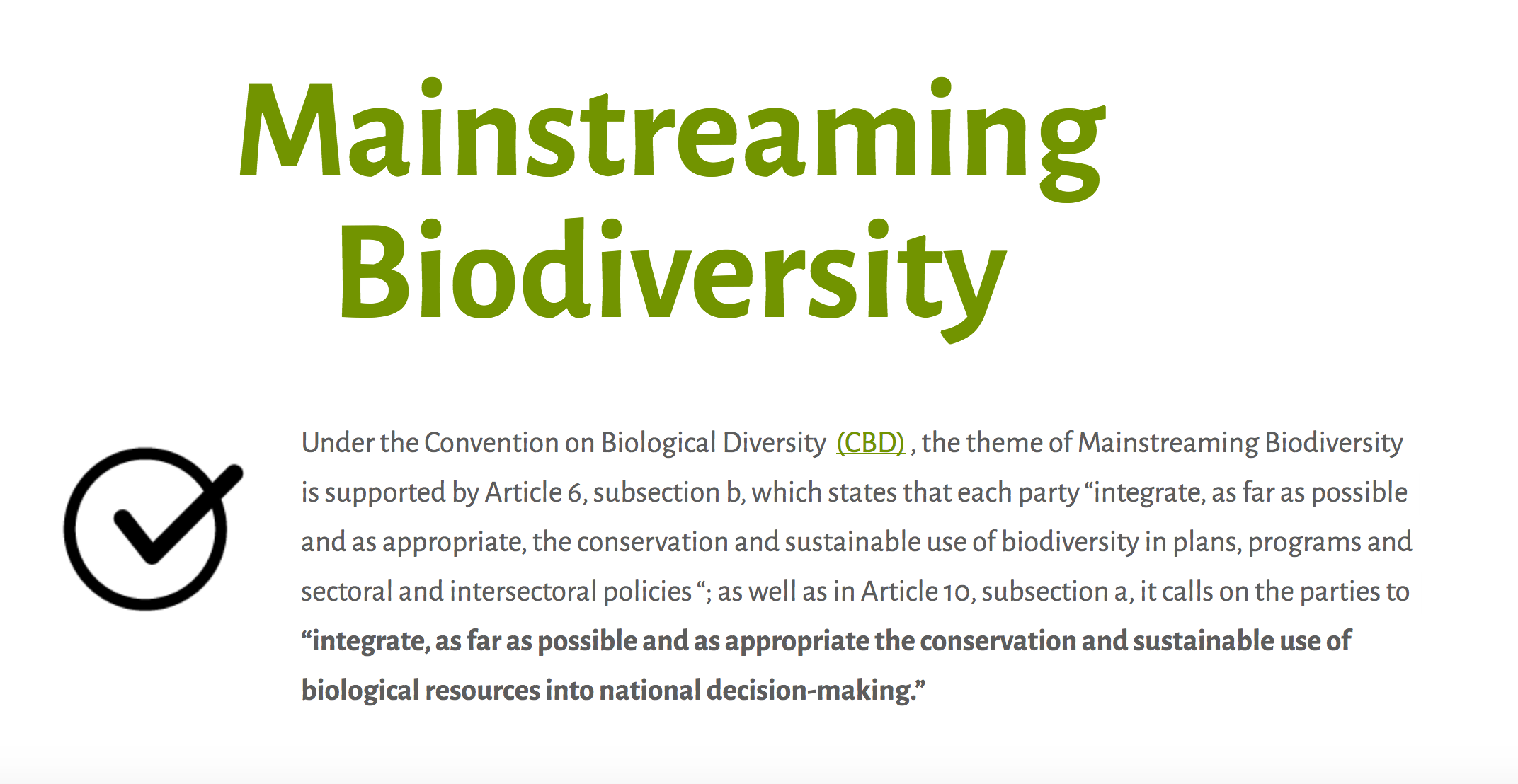 December 4th marks the start of the thirteenth Conference of the Parties of the Convention on Biological Diversity (CBD COP 13). While not as well-known as the climate COPs, this conference responds to a complex crisis that is both as threatening and urgent as the climate crisis. Globally, biodiversity is being depleted at an alarming rate. Animals are being wiped out as much as 100 times faster than their natural extinction rate. The last time the world experienced such a rate of decline was 65 million years ago, with the disappearance of the dinosaurs.

Sadly, it doesn’t end there. Biodiversity is being contaminated with genetically modified species, while at the same time, invasive species are taking over in many parts of the world. In short, we have already destroyed more than the equilibrium of our natural environment can bear. We find ourselves on the threshold of a species and ecosystems destruction that is already being called the sixth global biodiversity mega-extinction. This is no small matter.

In 1992, the Convention on Biological Diversity was born to tackle this biodiversity depletion crisis. Since then, plans and targets have come and gone, yet no real progress has been made. On the contrary, the situation has become progressively worse year on year.

The latest idea to avert this trend is to “mainstream” biodiversity into other sectors and bodies, beginning with the agriculture, forestry, fishery and tourism sectors. This means that biodiversity should become a cross-cutting element in all sectors, governmental and intergovernmental agencies.

Achieving this is important, as, so far, decisions adopted in the CBD are simply not a priority when national governments and business outline economic and development plans. Economic growth continues to be the main objective. However, every percentage increase of economic growth depletes natural areas further. Today few places remain unaltered by humankind.

There is certainly no point in developing environmental regulations and policies if countries continue to operate as they currently do. So, we need to ask:

– Will mainstreaming biodiversity have any real impact?

It is clear that the aim should be to completely alter the ways in which governments, international institutions and businesses make decisions that relate to biodiversity. Yet the current proposal on the table suggests the contrary: it merely “urges governments to strengthen their efforts to mainstream conservation and sustainable use of biodiversity”. It hardly sounds trend-breaking!

– How will it be implemanted?

Partly, by asking governments to implement the utterly inadequate outcomes of other UN bodies, such as the Paris climate agreement.

The mainstreaming proposal does call on governments to include biodiversity in cross-sectorial decision-making processes. A crucial question as yet unanswered, however, is how to make sure the other governmental departments do take this new CBD recommendation into account. However, with no evidence that previous decisions have been taken seriously, why should we expect that this time should be any different?

Mainstreaming biodiversity is, in itself, a good idea, since we need all decision-makers to be involved. But in practice it is clear that what is being proposed is merely marginal. It simply does not equate to the real system change to halt biodiversity loss.

– Does mainstreaming have negative impacts?

Sadly the answer is yes – monumental ones. The CBD hopes to raise awareness around the importance of biodiversity protection by putting a value on it. Indeed, the mainstreaming proposal repeatedly calls on Natural Capital Accounting. That is placing a financial value on the different elements of Nature, according to how many “ecosystem services” they provide to humanity. Of course, this number cannot capture the true value of nature and neglects other inherent, cultural and social values.

Furthermore, the human and financial resources that go into efforts to determine the economic value of nature – in terms of highly paid experts and expeditions- are unacceptably high. The same resources would be much better employed in truly protecting biodiversity.

What is worse is that putting an economic value on Nature is often used as a price tag. Proposals allong these lines include biodiversity offsetting and payments for ecosystem services.

Biodiversity offsetting actually permits the destruction of one ecosystem, as long as another ecosystem of the same value is created, or protected. This flies in the face of the need to halt biodiversity loss. There are usually severe problems with any offsetting scheme: it doesn’t happen at all, the ‘replacement biodiversity’ is very different to the original ecosystem or there are long time delays between the destruction of one site and the creation of the new site.

Another scheme that financialises nature is the “Payments For Ecosystem Services” (PES) schemes, whereby those who protect an ecosystem receive payments for the ecosystem services they provide. Although PES schemes do not directly permit ecosystem destruction, they are far from perfect. In the past, government legislation protected some ecosystems. Under PES schemes, an ecosystem will no longer have protection through legislation. It is only protected if there is an economic market for it. This becomes highly problematic for payment schemes whose finance ends, due to an economic crisis, for example. It also encourages those who do not receive payments to believe that, as a consequence, they have the right to destroy ecosystems.

It will also deprive ecosystems of protection if they are not in areas considered to be economically advantageous. Overall, PES paves the way for further destruction of the environment. As Claudia Ramos, from the environmental organization Otros Mundos A.C. in Chiapas, Mexico, puts it: “The Payment for Ecosystem Services Scheme further undermines the community forest management systems of indigenous peoples, disrupting their cultural and natural heritage”.

Sadly, despite these fundamental flaws, valuing and commodifying nature is one of the main components of the mainstreaming proposal. Decision-makers seem to think that business will only listen when they express Nature in financial terms.

The real guardians of nature are Indigenous Peoples and Local Communities

We have to exist within ecological and planetary boundaries. We need to inform democratic bodies so they fully understand the issue and ensure they can and do make decisions free from corporate influence.

Most importantly, we must ensure that mainstreaming includes those who are the real guardians of nature – Indigenous Peoples and Local Communities, living in forests and other ecosystems. As Nur Hidayati, director of the Indonesian environmental organization WALHI states, “we have proven that, in our country, the forests are best protected when the indigenous peoples and local communities living in them can exercise their rights to govern their own territories.”

Otros Mundos A.C./Friends of the Earth Mexico is part of the international federation of NGOs Friends of the Earth International, which is participating in the COP 13 of the Convention on Biological Diversity, taking place from the 4th to the 17th of December in Cancun, Quintana Roo, Mexico. We will share on our page our information and positions on the issues that are being tackled during the COP 13. Stay informed by following us on this webpage, our Facebook and our Twitter.