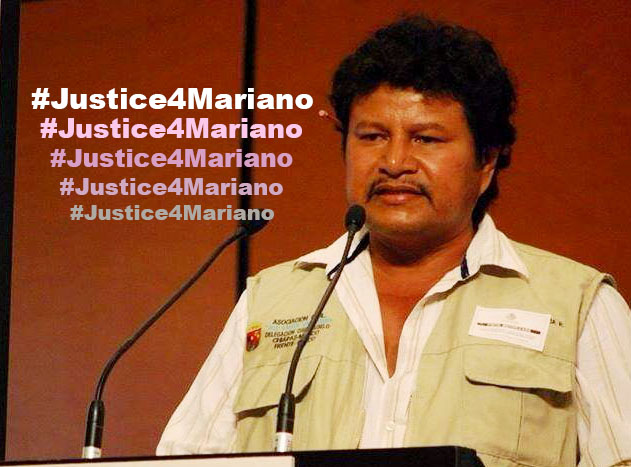 On June 26, 2017, Mariano Abara’s family sent a petition to the Inter American Commission on Human Rights (IACHR) against the state of Mexico for being responsible for the assassination Mariano Abarca Roblero, a human rights and environment defender from Chiapas killed on on November 27, 2009, by people with ties to the Canadian mining company Blackfire Exploration. Until today, the state’s investigation has stagnated, and the crime remains unpunished. Three co-petitioner stand by Mariano Abarca’s family: Otros Mundos A.C./Friends of the Earth Mexico, The Mexican Network of Mining Affected Peoples (REMA) and The Human Rights Centre of the Faculty of Law at the Autonomous University of Chiapas (UNACH).

You can support Mariano Abarca’s Family in its demand for justice, signing this action online here.

You can help spreading this action and the Family’s Press Release by sharing the links on you social networks with the hashtag #Justice4Mariano.

Manuel Velasco Coello
Governor of the state of Chiapas;

Raciel López Salazar
General Attorney of the state of Chiapas;

The assassination of community leader Mariano Abarca Roblero from Chiapas represents a grave violation of the rights to life, security, humane treatment, the freedom of association and to justice.

The Mexican state failed in its obligation to defend and protect the life of this highly regarded community leader who was murdered on November 27, 2009 in Chicomuselo, Chiapas for having spoken out about the negative impacts of the “Payback” barite mine owned by Canadian mining company Blackfire Exploration, located in the same municipality.

Before his murder, and throughout this struggle, Mariano Abarca was victim of a lengthy process of criminalization, intimidation, harassment, defamation and threats that included false accusations brought against him by the company that led him to spend days in jail.

Despite investigations having been opened for robbery and aggression against the Abarca family and then for the murder of Mariano, these have all stagnated as of today.

After several people being detained – all of them having worked in some capacity for Blackfire -, including one person having been sentenced in 2010, all are free today and the person who had been sentenced, absolved. New lines of investigation have not been pursued to identify the intellectual and material authors of this crime, which would bring some comfort to the family and to others who were part of the struggle with Mariano.

We demand that the Minister of Interior (SEGOB), the government of Chiapas and the Chiapas General Attorney resume and address in a serious manner the murder of this Mexican environment defender. An objective investigation is needed, which would fully clarify the facts and hold the material and intellectual authors responsible. The investigation should also examine the responsibility that Blackfire Exploration has in his assassination, as well as officials of the Chiapas state government who were implicated.

2 – Summary of our petition to the IACHR